Part Two- Are Entertaining Videos Worth the Investment?

A previous post from Holdcom discussed the value of entertaining videos in a world where John Travolta is better known for his role in Scientology than his role in Saturday Night Fever.  If you didn't get the chance to read it, you can check out the full article here.

That post left off with questions about whether our latest video would "generate leads, increase revenues, or grow business?" Let's fast forward to two weeks after our Inside Out Video Parody went live. We noticed our LinkedIn and Facebook post engagement increased. Below, you can see the increase in engagement between the average post and our video post.

On YouTube, our video had over two thousand views, 18 Likes, and 6 comments. The Landing Page where the video was displayed, had 350 unique visitors. In addition to promoting our video via email, social media, and word of mouth, we also expected our "featured talent" to spread the word as well.

So, did our entertaining video generate leads? A resounding "Yes!" Our video reached prospects in markets who would have never known about Holdcom otherwise. Prospects, who now know who we are and what we can do for their business. Not only did we reach prospects due to the video but, since we sent the video out in email we also got the attention of inactive clients, who sometimes may click on our newsletter but are more likely to click when a video is embedded.  Did we increase revenues due to our video? It's early, but we have experienced a significant bump in revenues and expect further ripple effect growth.

So as they say on election night, all precincts have not reported in, but we can project sustained growth, future leads, and creative juices flowing. 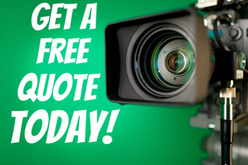