Hospitals Using Social Media? The Numbers Speak for Themselves

In a Forbes Article titled 10 Things Hospital Leadership Needs to Know about Marketing and Social Media, numbers 7 and 10 should be enough to convince even the most skeptical of hospital administrators that social media is more than just a fad or a playground for the young.

As for the so-called prevalence of the young, take a look at Number 3

This may be the reason the Mayo Clinic currently has 1.07 million Twitter followers. That esteemed hospital is not alone in diving into social media. The migration to the cyberworld has been a steady one. Research conducted by Creation Healthcare, a consulting and training company, found that back in 2006 when Twitter launched itself into the world, 23 healthcare providers ventured into it whereas by 2014, 75,000 providers were permanent residents.

Since such a large proportion of people put more faith in a hospital's informative content, than its glossy advertisements, it would be in the best interests of hospitals using social media to know the best places to post their videos, blogs, and articles. According to statistics complied by Referral MD in 2014,

Breaking this down further, It seems that of parents researching illnesses and treatments, 24% use Facebook and 20% rely on YouTube; of non-parents the numbers are 14% and 12% respectively.

Since online videos and peer opinions are becoming more and more influential in determining patients' healthcare choices, administrators need to explore all the ways they can increase their hospital's presence on social media.  Learn how nurses can utilize Twitter for offical use, personal use, and professional use. Don't leave audio marketing out of your marketing strategy and be sure to check out our free downloadable guide below. 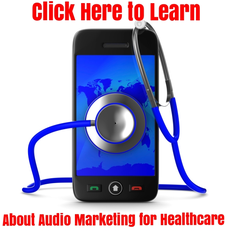